A conversation with Sharon Usher 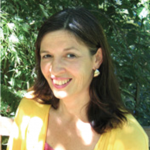 In this interview, organisational consultant, group facilitator, community builder, clown and constellator, Sharon Usher talks about her experience of bringing together two bodies of work – Improvisational Clown Theatre and Systemic Constellations. She shares some of the learning from a collaborative training with Judith Hemming in October 2010 called ‘Clowning Constellations and Community’, which they ran in a spirit of exploration. Sharon also observes the way that both disciplines work with the knowing field and how it influences her way of working.

Interviewer: Can you say a little about the traditional role of the clown in a social and organisational setting for the benefit of our constellation community.

The clown is a dweller on the edge. She has a unique relationship to ‘the rules’ in a social/organisational setting and hence it follows, it seems to me, to the formation of conscience and loyalty. The options for most of us are to go along with or to break the rules, however, the clown has the option to play with them. And in playing with them, they are brought to light in an accepting way that challenges at the same time and so may also undermine some of their ‘subconscious stickiness’ (my term :O).

We explore extensively in our work what it means to transgress i.e. to surface and play with the obvious and the less obvious rules, habits and values of a system. As a visual cue that serves as a metaphor here, we use a rope in our work to delineate the boundary between the stage and the audience. The clown can play with that boundary, approaching it, seeing how we in the audience react, putting a toe over, looking at us again, even leaping over it (then leaping back and apologising to an extraordinary degree). However, it is only pleasurable to transgress in this way, for the clown and the audience, if we all know that the clown knows that they are transgressing a boundary, and they play and replay that fact. For some reason, everyone finds that a real pleasure!

This, it seems to me, has implications for how the clown can help us live in a fuller awareness of how loyalty groups form. And that is interesting to me – how we can help emerge less entangled systems – as we go along (even though such awareness and insight could end up putting future constellators out of work!). Perhaps the clown has a role in bringing to light those rules that do not serve the greater whole. So the court jester plays at the dangerous edge of showing habits around power and authority that the king would rather not know about. Or the child points out, in innocence, that the emperor has no clothes…

Interviewer: How did introducing systemic principles affect the clowning experience for your trainee participants at the event you ran with Judith?

Well, participants varied from first-time clowns to those with years of experience. I think the introduction of systemic principles, and particularly personal constellations, upped the stakes significantly for our practice on the course. It required that those folk, who volunteered to bring some social clowning to a deeply personal constellation, trust the fundamental innocence of their clowning to an extraordinary degree.

We often invite personal stories on our trainings, and often these can be vulnerable places for the person offering them. But with a constellation we are surfacing what is hidden, even to the storyteller, so the level of vulnerability is increased. The social clowning is improvised and has no agenda other that what emerges through the play, so the clowns are equally vulnerable. The clowns needed to experience that the play can indeed be trusted here too i.e. the healing field moves the clowns, as long as they can be open to it. And what needs to be expressed is expressed. 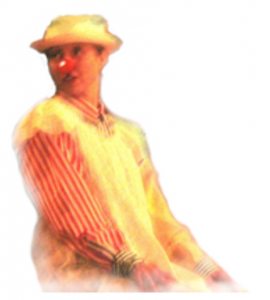 As clowns, we go into the play with no agenda, in much the same way that a constellator facilitates a constellation. However, as clowns we do not have any organising principles behind us, other than our own authenticity and a commitment to going with whatever takes our attention and staying with the most playful and enjoyable.

Less is often much much more in clowning, we often encourage people to be still and really receive where they are, and resist trying to ‘make’ anything happen. The clowns own naïveté and vulnerability, serve to carry her through
lots of complexifying information as she pays profound and simple attention to what is exactly under her nose…

The following quote says something to this I feel:

Interviewer: What else did you discover by bringing in principles and practices from constellations such as conscience, phenomenology and resourcing?

The clown, at her best, is a fundamentally phenomenological being, so trusting the impulse of the moment to unfold the story is simply how she lives anyway. And the clown is no stranger to those moments of uncanny magic when an unplanned and unexpected coherence suddenly emerges during an improvisation. So the people who had experience of clowning could embrace the practice of constellations quite readily. I think those in the group who were new to both clowning and to constellations had a major amount to digest! However all were very involved in the exploration and, from the feedback we received, came away with a more inclusive perspective, and a great many good questions, about clowning and about constellations.

I suspect that those people who have done clowning for some time would have no hesitation in accepting that their clown is a constant and reliable resource to them in all sorts of situations.

And as I mentioned before, the clown has a particular relationship to conscience, in that she plays with the feelings that arise when she breaks rules/habits/values. When this happens there is often an enjoyment, or sometimes a poignancy, in the audience that comes with the recognition of our common human vulnerabilities and perennial ‘failings’ as we gamely attempt to navigate this life..

Interviewer: Part of the training programme involved bringing a clown actually into a client’s constellation. What was the impact of doing that?

I was the clown who experimented with being there with the issue holder from the beginning of her constellation. I found that my impulse was to sit on the floor just behind her as she had her interview with Judith. I felt immediately engaged and connected to her and wanting to keep a very low profile. But of course, it was a strong image for everyone in the circle. Who knows what impact that had.

At the end of the constellation, the issue holder said she felt braver to go further because I was there, showing her own clown, which she really values in her life. I don’t know if a clown presence in a constellation would resource someone who does not have a deep love of clowning. That is a question for further exploration…

“I so remember your presence in the constellation. I think it gave me insight into a different side of clown actually, because I took your clown to be the embodiment of unconditional love. It was profoundly moving.”
– Trainee & Issue Holder,
(Clowning Constellations & Community)

Interviewer: Having been on a journey of discovery, integrating constellations into your clowning work life, how does it influence what you do now?

There are a number of ways that constellations inform and support my work now. The clowning relies on the development of a safe group context for people to explore as deeply as they wish to. So as a facilitator I pay as much attention to the balancing of the orders as I can in the set up and holding of the group.

I feel personally resourced as a facilitator in my guiding of improvisations on stage by my knowledge of the orders. The more I can encourage people to express it on stage when some balance is being lost the more fun they have as the flow finds its way e.g. when someone is initiating the action all the time (giving) I can bring balance by gently guiding them to stop, and to receive from their partner.

I feel that my study of constellations has underlined my trust in the friendliness of the field and that, in turn, gives me courage in all my improvisation work both as a clown and as a clowning facilitator.

Interviewer: Thank you so much. There is a strong sense of how clowning and constellations enable us to be with ‘what is’. Could you share a last image or thought that captures this potential for their restorative capacity? 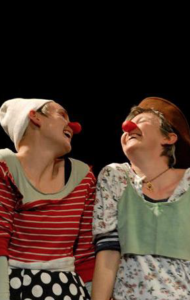 Definitely. It comes from Henry Miller and is called ‘The smile at the foot of the ladder’.

“A clown is a poet in action. She is the story which she enacts. The clown teaches us to laugh at ourselves. Joy is like a river: it flows ceaselessly. It seems to me that this is the message which the clown is trying to convey to us, that we should participate through the ceaseless flow and movement, that we should not stop to reflect, compare, analyse, possess, but flow on and through, endlessly, like music. This is the gift of surrender, and the clown makes it symbolically.”

For further information about Sharon’s Clown work at ‘Nose to Nose’ and more about her professional background, you can visit: www.nosetonose.info